People from the south, rejoice! The world-famous Original Orange Chicken™ is coming your way, as Panda Express is finally heading south of Metro Manila.
The world’s largest American Chinese dining concept is set to open its third restaurant on June 11, 2021, in the busy commercial block of Double Dragon Meridian Park in Pasay City. This will be its first store in the south and the third in the country, after launching its first location in SM Megamall in 2019 and second in SM North Edsa.

“We are thrilled to finally countdown to our opening day and share with our fans in the South Panda Express’ exceptional American Chinese cuisine. Guests living and working around the central business district in the Bay Area have always expressed their cravings for Panda Express. And we heard them. We heard you. Panda Express is continuously introducing to Filipinos its innovative take on American Chinese cuisine that showcases the ‘Wok Hei,’ or ‘breath of the wok,’ which creates that signature smoky, umami flavor of the entrées. The top quality of ingredients, preparation, and cooking all make a difference in the addictive flavors that make our guests fall in love with Panda Express dishes.” ~Julius Marlon Dela Cruz, Panda Express Marketing Manager

The world’s largest American Chinese dining concept is set to open its third restaurant on June 11, 2021, in the busy commercial block of Double Dragon Meridian Park in Pasay City. This will be its first store in the south and the third in the country, after launching its first location in SM Megamall in 2019 and second in SM North Edsa.
American Chinese Classics
The Panda Express menu includes a variety of entrées with influences from the eight traditional cuisines of China. Its bestselling the Original Orange Chicken™, crispy chicken wok-tossed in sweet and tangy sauce, is inspired by Panda Express co-founder Andrew Cherng’s hometown flavors of Yangzhou, China.
The American Chinese restaurant brand also recently introduced two new dishes to the Philippine menu. First is the Panda Express signature pescatarian-friendly dish Honey Walnut Shrimp™, which is a Canton dish inspired by Western influence that is made with large and crispy tempura-battered shrimp, lightly coated in the unique honey sauce and topped with glazed walnuts.
As another best-selling international dish, Mongolian Pork is a classic American Chinese dish made with tender pork shoulder and crisp vegetables, wok-tossed in a savory garlic soy sauce.
For guests who wish to have their favorite Panda Express dish in the comfort of their own homes, Panda is also available via Facebook Messenger and food delivery apps GrabFood® and foodpanda®. Delivery locations are within Metro Manila only.
Brand expansion
The latest Panda Express store opening is part of the plans of JBPX Foods, Inc.—the joint venture of Jollibee Foods Corporation with Panda Express operator, Panda Restaurant Group, Inc.—to open five stores during the initial phase of the partnership.
Panda Express, founded by husband-and-wife tandem, co-CEO, and co-founders Andrew and Peggy Cherng in 1983, is still family-owned and operated today. They have popularized American Chinese cuisine by using authentic Chinese recipes adapted to global tastes, successfully establishing the brand as the largest Asian dining concept in the US and the largest American Chinese concept in the world.
To date, Panda Express has more than 2,300 restaurants all over the world, and with more than 40,000 associates. Outside of the US and Philippines, Panda Express is present in Canada, Guatemala, Aruba, Japan, Mexico, El Salvador, South Korea, Russia, Saudi Arabia, and the United Arab Emirates.
To know more about Panda Express, you may visit www.facebook.com/PandaExpressPH/ on Facebook and https://www.instagram.com/PandaExpressPH on Instagram.
GrabFood is a trademark owned by Grabtaxi Holdings Pte. Ltd.
foodpanda is a trademark owned by Emerging Markets Online Food Delivery Holding S.a.r.l.
About Panda Express
On a mission to inspire better lives, Panda Express® is the largest Asian dining concept in the world. Family-owned and operated since 1983 by co-founders and co-CEOs Andrew and Peggy Cherng, Panda Express is best known as a trailblazer for creating a wide variety of industry-first recipes, including its best-seller the Orange™ Chicken and award-winning Honey Walnut Shrimp, which have defined the category of authentic American Chinese cuisine. Each entrée at Panda Express, including the Wok Smart selections, is thoughtfully crafted with quality ingredients and inspired by bold Chinese flavors and culinary principles. The restaurant brand has more than 2,300 locations and has introduced American Chinese cuisine to twelve international countries. Powered by this global family of associates, Panda Cares®, the philanthropic arm of Panda Express, has raised more than $216 million and dedicated countless volunteer hours in bettering the health and education of over 12 million youths, as well as supporting communities in need since 1999. Visit www.facebook.com/PandaExpressPH/ (Facebook) and @PandaExpressPH (Instagram) for more information.
About Jollibee Group
Jollibee Group is one of the fastest-growing Asian restaurant companies in the world. It operates in 33 countries, with over 5,800 stores globally with branches in the Philippines, United States, Canada, the People’s Republic of China, United Kingdom, Italy, Vietnam, Brunei, Singapore, Saudi Arabia, United Arab Emirates, Qatar, Oman, Kuwait, Bahrain, Indonesia, Costa Rica, Egypt, Panama, Malaysia, South Korea, Japan, and India. It has eight wholly-owned brands (Jollibee, Chowking, Greenwich, Red Ribbon, Mang Inasal, Yonghe King, Hong Zhuang Yuan, Smashburger), four franchised brands (Burger King and Panda Express in the Philippines, Dunkin’ Donuts, and Tim Ho Wan in certain territories in China), 80% ownership of The Coffee Bean and Tea Leaf, and 60% ownership in the SuperFoods Group that owns Highlands Coffee and PHO24 brands.
Jollibee Group is a significant investor in Titan Dining LP, a private equity fund and the ultimate holding entity of the Tim Ho Wan (THW) Brand, and has a joint venture with the THW Group to open THW restaurants in Mainland China. It also has a business venture with award-winning Chef Rick Bayless for Tortazo, Mexican fast-casual restaurant business in the United States. The Group will also establish a 50/50 joint venture to operate and expand Yoshinoya - one of the largest and most recognized Japanese restaurant brands globally - in the Philippines.
Jollibee Group was named the Philippines’ most admired company by the Asian Wall Street Journal for ten years. It was also honored as one of Asia’s Fab 50 Companies and among the World’s Best Employers by Forbes. In 2020, Gallup awarded the Jollibee Group with the Exceptional Workplace Award, making it the first Philippine-based company to receive the distinction.
Jollibee Group has grown brands that bring delightful dining experiences to its customers worldwide, in line with its mission of serving great-tasting food and spreading the joy of eating to everyone.
- June 07, 2021

NBA Fans Attempts Select Signature Shots from the 2021-22 Season. With a simulated authentic NBA arena atmosphere to showcase your offensive... 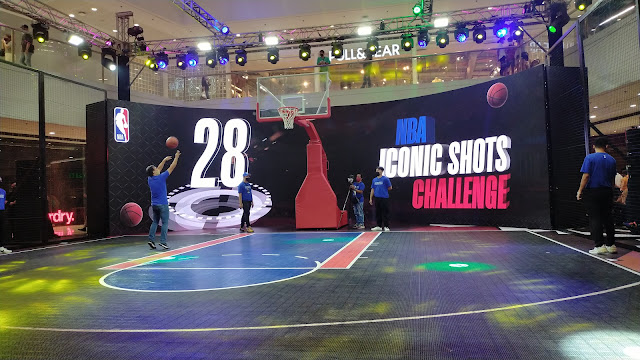