Bacardi encourages fans around the globe to #DoWhatMovesYou by partnering with artists in the Philippines, India, and South Africa for a series of live performances on May 3.
﻿ 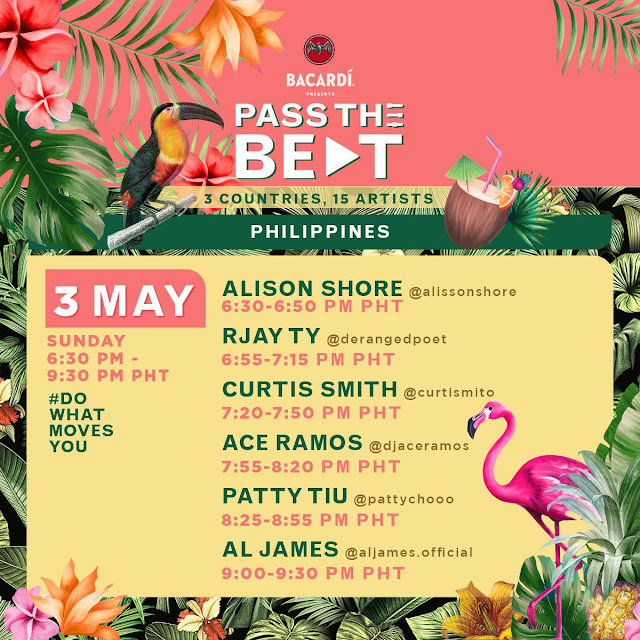 They say music heals the soul and bonds us together. Bacardi, the world’s number one premium rum, aims to bring a sense of comfort in the midst of these challenging times with #PassTheBeat.
Through a virtual party, Bacardi will unite artists and performers from the Philippines, India, and South Africa for a night of heart pumping, energizing beats guaranteed to enthrall music lovers and inspire them to continue to do what moves them even in the face of adversity. 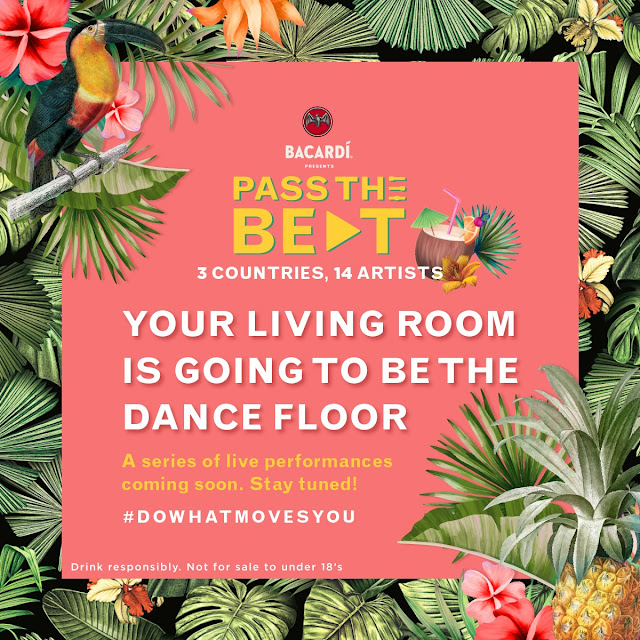 ﻿
﻿
The “Pass the Beat” experience will stream on Instagram Live on Sunday, May 3, with each artist hosting a live DJ set on their page before they #PassTheBeat to the next party starter. The beat will start at 6:30PM in the Philippines with rapper Alisson Shore and move over to fellow musicians Rjay Ty at 6:55 PM and Curtis Smith at 7:20 PM. The event will also feature two of Manila’s most sought after DJs, Ace Ramos at 7:55 PM and Patty Tiu at 8:25 PM. For the final Philippine act, rapper Al James will perform at 9:00 PM with his crowd drawing rhythm and prose before passing the beat over to some of the best DJs in India and South Africa.
Vlogger Wil Dasovich will hold engaging sessions with the artists prior to their performances for a dash of humor to the experience. Adding zest is hot topic DJ Loonyo's signature dance covers in support of the Pinoy musicians!
Philippines, it’s time to get on your feet in your best Team Bahay outfits to #DoWhatMovesYou. Tell your friends, join the party, and let’s #PassTheBeat on to keep us connected in high spirits.
﻿
﻿
About BACARDÍ Rum
In 1862, in the city of Santiago de Cuba, founder Don Facundo Bacardí Massó revolutionized the spirits industry when he created a light-bodied rum with a particularly smooth taste – BACARDÍ. The unique taste of BACARDÍ rum inspired cocktail pioneers to invent some of the world’s most famous recipes including the BACARDÍ Mojito, the BACARDÍ Daiquirí, the BACARDÍ Cuba Libre, the BACARDÍ Piña Colada and the BACARDÍ Presidente. BACARDÍ rum is the world’s most awarded rum, and spirit, with more than 550 awards for quality, taste and innovation. Today, BACARDÍ rum is made in Puerto Rico and Mexico where it is crafted to ensure the taste remains the same as it did when it was first blended in 1862. www.bacardi.com
About Bacardi Limited
Bacardi South Africa (PTY) LTD is a subsidiary of Bacardi Limited. Bacardi Limited, the largest privately held spirits company in the world, produces and markets internationally recognized and award-winning spirits and wines. The Bacardi Limited brand portfolio comprises more than 200 brands and labels, including BACARDÍ® rum, the world’s number one best-selling and most-awarded rum, as well as the world’s most-awarded spirit; GREY GOOSE® vodka, the world’s leading super-premium vodka; DEWAR’S® Blended Scotch whisky, the world’s most-awarded blended Scotch as well as 2020’s 2nd best-selling Blended Whisky and the 5th best-selling Scotch overall; BOMBAY SAPPHIRE® gin, the top-valued and fastest-growing premium gin in the world; MARTINI® vermouth and sparkling wines, the world’s leading vermouth and the world's favorite Italian sparkling wines; CAZADORES® 100% blue agave tequila, one of the most popular premium tequilas in Mexico and the United States; and other leading and emerging brands including WILLIAM LAWSON’S®, the fastest-growing global Scotch whisky brand; ERISTOFF® vodka, one of the fastest-growing vodka brands in the world; and ST-GERMAIN®, a super-premium elderflower liqueur. Founded 158 years ago in Santiago de Cuba on February 4, 1862, family-owned Bacardi employs over 6,000 people, manufactures its brands at 27 facilities and sells in more than 150 countries. Bacardi Limited refers to the Bacardi group of companies, including Bacardi International Limited. www.BacardiLimited.com
LIVE PASSIONATELY. DRINK RESPONSIBLY. BACARDÍ, AND THE BAT DEVICE ARE REGISTERED TRADEMARKS OF BACARDÍ & COMPANY LIMITED. BACARDÍ, THE BAT DEVICE AND OTHER MARKS RELATED TO BACARDI GROUP PRODUCTS QUOTED IN THIS PRESS RELEASE ARE TRADEMARKS OF BACARDI & COMPANY LIMITED OR OF OTHER SUBSIDIARIES OF BACARDI LIMITED.
SUBSIDIARIES OF BACARDI LIMITED.
﻿
- April 30, 2020